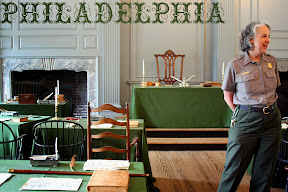 Click for 19 pics in Picasa. Philadelphia was at the centre of the American Revolution. They proclaimed their Declaration of Independence there and later the first parliamentary assemblies took place there in buildings and rooms that are now museums. It is fascinating to stand in those same re-purposed courtrooms that they used before moving to Washington, and to think about those early leaders that risked everything – their lives and fortunes – to defy the King and the might of the British Empire.

The last room shown is arranged as it was during their Constitutional Convention presided over by George Washington.