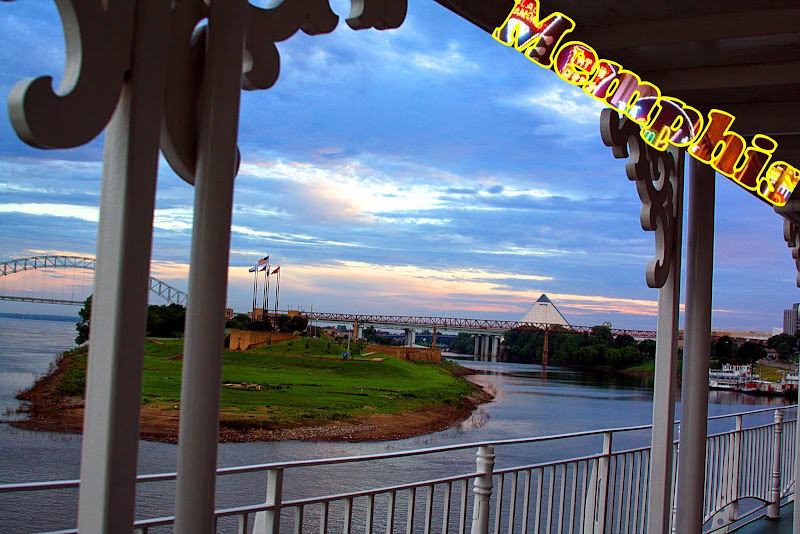 Click for 33 pics in Picasa. We disembarked in Memphis, Tennessee opposite the artificially made Mud Island. They have torn up all the cobblestones at the old port and built a big concrete terminal. That’s progress. The pyramid was built for a baseball team that went and played elsewhere, so now it is a derelict white elephant. A lot of the old warehouses around the port are being converted to condominiums, but most folk live out in the sprawling suburbs and commute by car.

Memphis is the birthplace of Rock ‘n Roll and the Blues Capital of the world. We spent a lot of time in Beale Street where it all happens, mainly at night and early morning. We ate at Silky O’Sullivans World Famous Irish Pub (excellent gluten-free menu for Barbara), and went to a Jerry Lee Lewis show. All the music is loud and when you are in the street you are blasted from all sides, but inside the venues it is so loud you can’t hear anything else, including yourselves. The Elvis impersonator was too loud even with your fingers in your ears (looking like old fogies). And that was after the waiter summed us up in one glance and put us in a booth way down the back as far from the sound as possible. All the shows captured the music perfectly and you couldn’t help but get into it, loud or not.

We went on a tour of Sun Studios, the original studio where all these famous records were made still being preserved exactly as it was. You could stand on the gaffer-taped cross on the floor that marked where vocalists stood to record, including Elvis when he recorded his first records, and you could hold the very same microphone. It’s a studio mike, sturdily built and still going strong. We didn’t sing, but people still pay to make recordings using that historic technology to get a unique sound. They played lots of the original recordings and told the stories. Like Elvis paid the standard fee of $3.98 to self-record “My Happiness”, and that one-off acetate has since been valued at $500,000.

They are big on Cadillacs in Memphis, including the ’59 Caddie that took Barbara’s fancy. Bit hard to get it home though. We saw the ducks march at Peabody’s Hotel and we rode on the trolley cars for $3.50 all day. We saw the Lorraine motel where Martin Luther King was assassinated, now a very moving memorial, and we drove down Lonely Street to Heartbreak Hotel.

We saw Gracelands from outside but the queues were long and our interest in Elvis’s home is modest, so we didn’t take the minimum 3 hour tour inside.

Memphis was great, miles of walking and lots of excitement.

Beale Street Memphis, and a carriage on the way back to our hotel (50 sec):
http://youtu.be/BqxZOvbhGFw