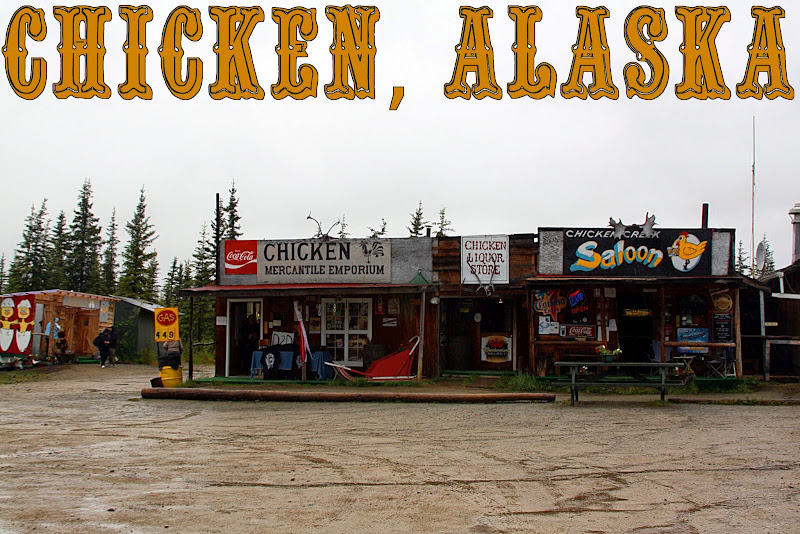 Click for 10 pics in Picasa. It’s the summer solstice, the longest day, on 21 June. The sun sets well after midnight in Alaska the land of the midnight sun, so on the solstice everyone parties and they play midnight baseball and have midnight concerts. They finish up the baseball at 1am as it becomes dusk for a little while before sunrise.

Then they get all mournfull because after 21 June the days are getting shorter and winter is on its way back. Not mournfull for long though because they like winter too, otherwise they wouldn’t be here.

The Top of the World Highway goes North from across the Yukon river by ferry from Dawson City through the town of Chicken, and up to the Alaska Highway. In general, in summer it gets warmer in Alaska as you go North, because of the increasing hours of sun. This was an exception, our driver Les had to contend with a howling blizzard and snow on the gravel road. He did a magnificent job in getting us through not only safely but cheerfully. It’s a great party atmosphere being warm and safe inside in a snowstorm.

The town of Chicken got its name because the area was abundant in Ptarmigan, a bird that resembles chicken, so they decided to name the town Ptarmigan. But Ptarmigan was too hard to spell, so they called it “Chicken” instead. They provided us with a welcome stop in the storm, with excellent chicken soup and home-cooked fruit pies, and pot-bellied stoves to warm by. They do a great job considering the town has no electricity or running water. It also has no phones and that means no internet if you can imagine that. Mail arrives by plane Tuesdays and Fridays of every week.