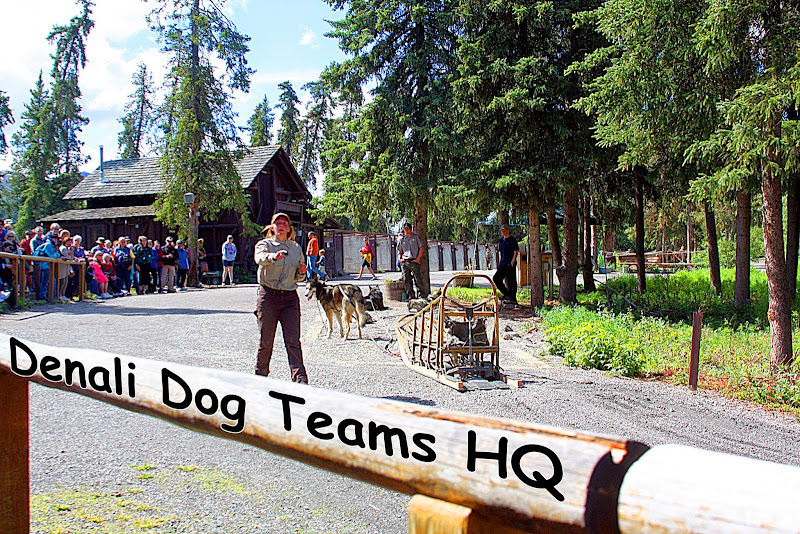 Click for 9 pics in Picasa. Denali National Park is a declared wilderness area covering 6 million acres of Alaska. The rangers use dog sleds to patrol the park in winter, because no motorised vehicles are allowed.

During the summer, they exercise the dogs using wheeled sleds and you can visit the dogs in their kennels and watch the training. It is obvious that the dogs love to be hitched up as a team and out running and towing that sled. They have voice commands for left and right, and stop (whoa same as a horse, but you have to stand on the brakes real hard as well). You don’t need a command for go because that is what they do, pulling and waiting for the brakes to be released, like dogs straining against their leads. Wagging their tails and raring to go. And when they go they are amazingly fast. They only do short sprints in summer because they overheat, but in winter when it is minus 40 below they can travel huge distances. Yes that’s a double negative but that’s what they call such temperatures, probably for emphasis. And -40F equals -40C, that is where the scales cross.

The pics are after their sprint, and they were all ready for a rest and cool down, and chew on a raw-hide bone.

These were pure breds because they were working dogs not racing dogs. There were ropes to mark the dogs boundaries so they could choose to stay on or in their kennels, or come over and socialise. Most did a bit of each.
The ranger asked us to imagine if we were a dozen people surrounded by hundreds of dogs, and that helped us to see the different perspective and give the dogs some space.